The German shepherd is a versatile utility dog whose breed comes in several “types,” all with unique origins, histories, and traits.

It is one of the most sought after breeds of dogs globally, with its popularity stemming from the general traits of high intelligence, devotion, and dependability.

They also possess an unmatched work rate that cuts across all the types of German shepherds.

Loyalty, a strong guardian instinct, easy-going nature, and sound nerves also compose some of the other characteristics common across the breed that has endeared it to humans.

The most common German shepherd types include

And today we’ll be delving into all things related to the working line German shepherd types. 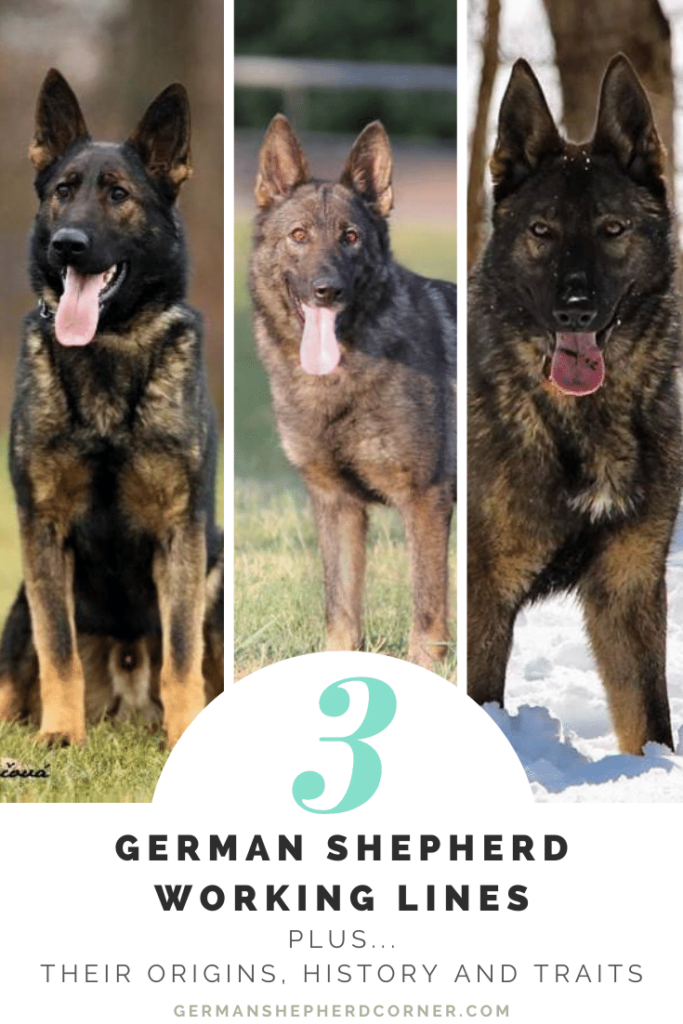 The history of the working line German shepherd can be traced back to the 1850s in Germany when the dogs’ breeding was standardized.

Dog breeding was introduced mainly to produce dogs that would help the shepherds protect the flock from predators.

Throughout this time, however, contentions existed on whether the bred dogs should be used for appearance only or whether they could perform working functions as well.

This advocacy was inspired by the performance and abilities of the dog Hektor Linksrhein in a dog show.

The breeding of working line German shepherds became popular from then onwards.

Horand’s abilities and genes became the core of the breeding system for working line German Shepherds and set the foundation for developing working line types of German shepherds.

The program proved successful when out of Horand came Schwaben and Beowulf, who became the origin of the existing German shepherd working lines.

German shepherds soon became popular in America when their first exposure happened there in 1907.

Developments in the cross-breeding processes of German shepherd working lines further improved during the Second World War, with German shepherds assisting both the Axis powers in paramilitary and military initiatives.

Even after the war, however, both America and Germany undertook rigorous breeding and training programs of the German shepherd working lines. 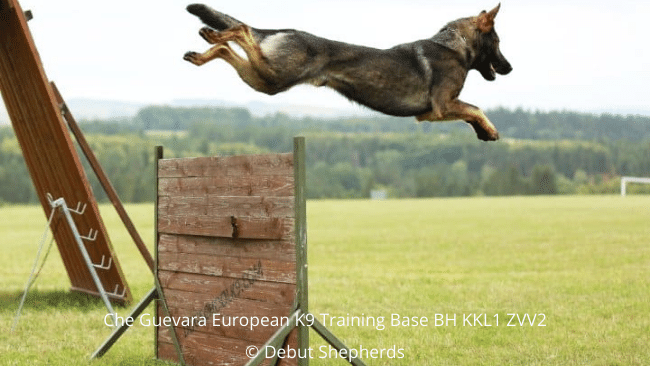 The working line German shepherd has a thicker and straight body structure relative to the show lines.

The German shepherd working lines have distinct characteristics that differentiate them from their counterparts, the show lines.

First, working line German shepherds are bred and trained specifically for work, which involves having the mindset to perform under pressure and the desire to work at all.

The working line German shepherd also has a thicker and straight body structure relative to the show lines, who have thinner and have slanted backs due to their hind legs being shorter than their front legs.

The hind legs of working line German shepherds are longer than those of show lines, and they also have a medium-length double coat for higher tolerance in adverse climatic conditions.

In terms of personality, working line German shepherds are bred specifically to enhance various drives such as prey, defense, and fight.

And to bond tightly with their handlers in order to have the desire to work for them.

Also, to be exceptionally clear-headed with stable temperaments to follow orders given to them. 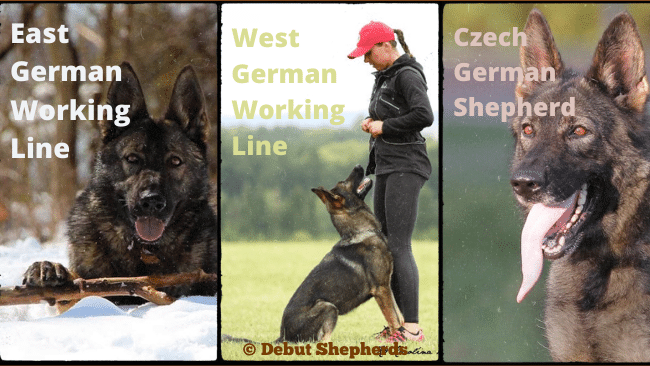 Next up is a deep-dive into types of working line German shepherds! 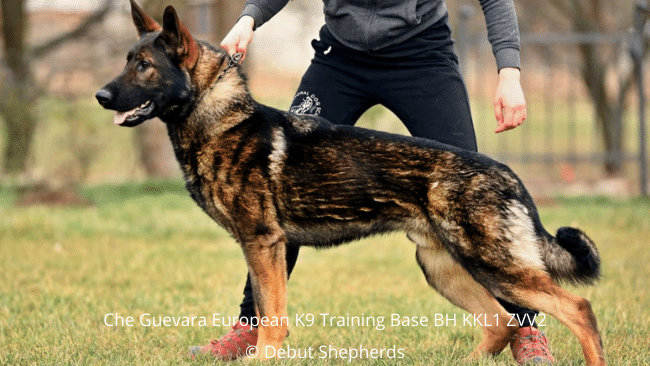 The West German working line has been referred to as the most balanced in terms of appearance, temperament, and working ability.

Like its show line counterpart, it traces its origins back to West Germany, which existed when Germany was split into the East and West.

It is considered the closest representation of the types of dogs bred initially by Stephanitz.

In their breeding, greater focus is given to the correct working structure, a stable temperament, a strong working drive, and great ability.

The West German working line can be considered in contrast to the West German Show line, bred purposefully to work real jobs in service positions, but it also excels in many different sports.

Therefore, their bodies have been bred to take on a more defined working structure relative to the show line types.

Unlike the West German show lines, which were bred to conform to specific show standards, the West German working line was bred to excel in jobs such as protection and law enforcement particularly.

Nonetheless, the West German working line can also make for a great family pet with an active family.

Nevertheless, they require great attention in terms of exercise and mental stimulation due to the breed’s high working drive characteristic.

They have a lot of energy, and hence they need to be continuously occupied with high-intensity activities, lest they grow restless.

A slight slope of their backs characterizes their appearance, not quite as much as the West German show line but can be greater than that of other working line types.

Their back and hindquarters’ angulation lies somewhere between that of the West German show line and the East German working line.

The characteristic regal head and shoulders of the German shepherd working lines are present, but they are less bulky in the front of the body.

Subsequently, this build allows them to have a relatively balanced body, bred for speed, agility, and bite power.

While their popularity was high after the World Wars before subsiding with time, they have since carved out a name for themselves in recent times for their capacity to learn, work and provide companionship.

DDRs trace their origin from the guard dogs lines initially bred in East Germany after the Second World War, and they are known mainly for their police work.

Their name originates from Germany’s official name during the period, Deutsche Demokratische Republik, translating to the Federal Republic of Germany.

The East Germany Communist Party set up a strict breeding program for German shepherd dogs utilized in the military during the cold war era.

The East German shepherd breeding program was established to keep pace with the shift in the security demands of East Germany.

Within the territory, the government faced an increasing need to deal with attempted defectors from the military.

And the country saw the benefits availed by superior dogs in dealing with their security issue, breeding dogs that excelled in police and military work.

The East German working line was bred with traits such as withstanding the gruesome winter weather and the capacity to scale six-foot walls, which would help them perform their roles.

Because the breeding of East German working lines was highly regulated and isolated from outside influence, the breeding program’s discipline and standards were maintained at significantly high levels.

The East German working line generally displays high-energy levels and high-intensity, alongside what can be termed as a ‘hard edge’ working drive.

It possesses many of the qualities that human soldiers are endowed with, which helps them adapt and thrive in the roles they perform.

Like soldiers, East German working lines have high endurance levels, an iron will, courage, high intelligence, and a strong capacity to maintain focus.

However, in modern times, not all DDRs display the same soldier-like characteristics, as some may be quite laid back and less drive-y.

Their temperament enables them to be gentle with their family while still being protective.

The dog devotes unending loyalty to anyone who shares a home with it and is increasingly wary of anyone or anything that can be considered a threat.

This includes strangers, who may require a careful and thorough introduction with it. Their loyalty to their family fully extends to even its youngest members.

East German working lines have appearances that strongly conform to what is expected from a working line dog.

Their appearance leans more towards resembling that of the West German Working Line German shepherd.

The dogs have a thick bone structure characterized by low-fat composition and more muscle.

Such a body structure enables the dog to display superior athleticism, with great strength, agility, speed, and stamina.

Compared to other German shepherd lines, the East German working line can have a straighter back than any other line. 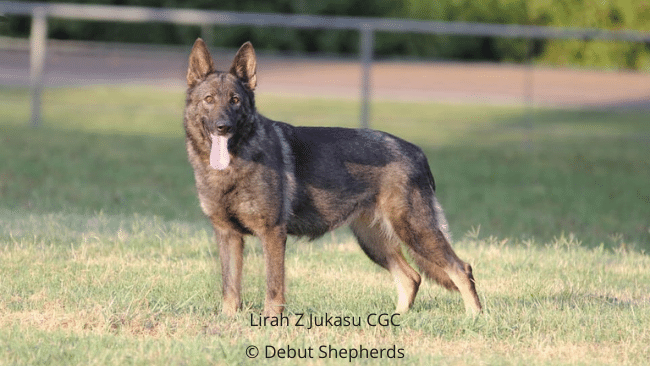 The Czech German shepherd, otherwise known as the Czechoslovakian shepherd, originated from the communist Czech Republic.

They had been bred as working dogs in the Czech since 1955, but their popularity grew from 1989 when East and West Germany were reunified.

While initially they had been bred purposefully for border control jobs, the Czech German shepherds were bred more as family dogs, rather than working dogs, from the time after the reunification of Germany.

They took up many of the East German working line traits, including loyalty, intelligence, strong nerves, and working potential.

While the two types of German shepherds have very similar bloodlines, they are not the same.

Nevertheless, DDR and Czech German shepherds are often referred to as and compared to each other.

Czech German Shepherds tend to have higher drives than their West German or East German counterparts.

They commonly have a more slender yet dense appearance and can appear more powerful.

They stand on thick tight paws and a deep chest, with strong jaws and a robust body, which was useful in catching criminals when they were initially bred in Czechoslovakia. 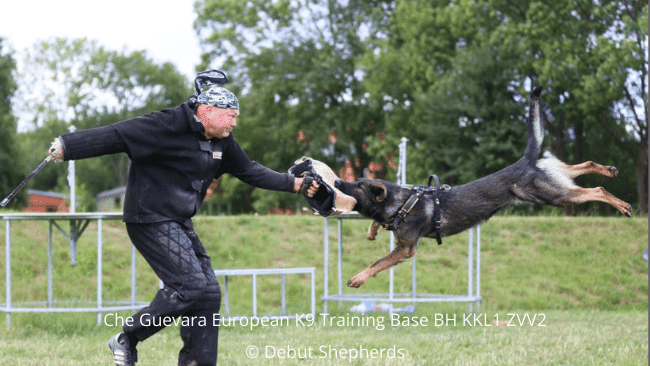 The next question always seems to be, “Which type of working line should I choose as a family pet”?

Here’s what you should do instead…

While each type of working line German Shepherd may have common traits, each individual puppy and dog is different and should be judged as such and not thrown into a specific category of traits due to his or her breed type.

Learning about the history and origin of the various working line shepherds is fascinating.

But your best bet is to speak with a breeder and let them guide you to a puppy that is the right fit for your home and needs.

Regardless of which breed type of working line shepherd, he falls into. 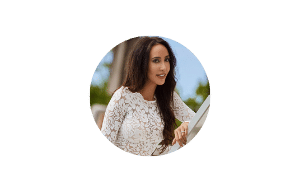 Lane Naymola, the owner of Debut Shepherds, has been involved in working line German Shepherds for most of her life. She has a deep love for the breed and won’t own any other kind of dog. Her passion stems from the dog’s genuine love of its family, naturally protective instincts, quick wit, and charming personality.

Unless otherwise stated all images are the property of Debut Shepherds.