What are the Most Popular German Shepherd Mixes

German Shepherds are part of the most popular dog breeds in the world. They originated from Germany, and their bloodline can be traced back to the 1800’s.

Since then the dog has been bred by generations. They are known as one of the best work dogs for several reasons; they are incredibly keen sense of smell, have fantastic versatility and endless energy.

The Most Popular German Shepherd Mixes 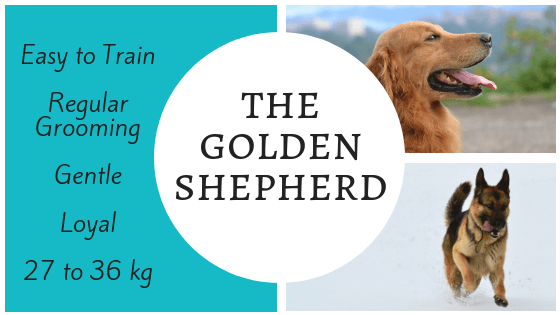 This breed is known for being incredibly social with everyone including kids and other pets. It thrives on human interactions and suffers separation anxiety when left alone for a while.

The resulting breed is very alert, hardly aggressive and easy to train. They are highly active and will require constant mental stimulation and physical exercise.

The average weight of a Golden Shepherd is 27 to 36 kg. They range from medium to large. The general life expectancy is between 10 and 14 years. An adult dog of this breed will be of 20 to 26 inches. 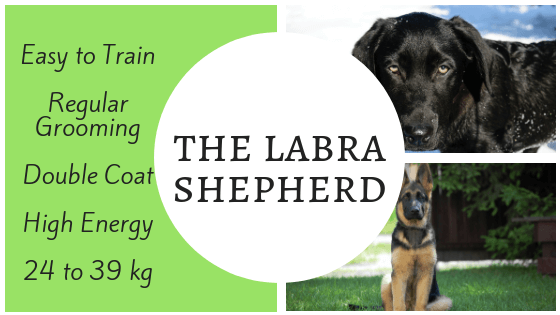 Labra shepherds are among the most famous German Shepherd crossbreeds. They are also known as Lab Shepherd dogs. They make the most superb and outstanding family canine.

They are always full of energy and enjoy loads of quality time with their family members. This mix breed has a double coat which is ultra-warm. They will need regular grooming as they do tend to shed. 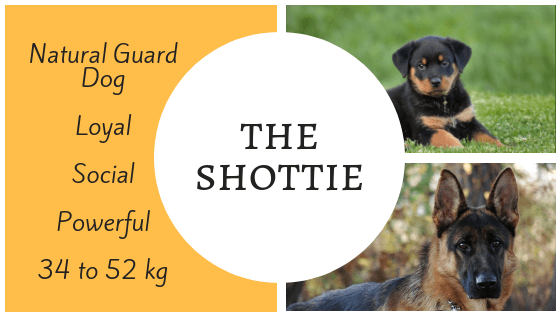 This crossbreed is amongst the most muscular mixed breeds in the world today. They are often referred to as Shepweiler, Rotten Shepherd, Rottie Shepherd, Rottweiler Shepherd and Shottie.

These dogs require adequate training within their early months or else they could become a handful. Lack of proper training will result in them having little to no respect for commands.

Their natural watchdog instincts could also lead them into becoming aggressive and overprotective. The best time to start training is when they are about five to six weeks old.

The German Shepherd Rottweiler is very affectionate, obedient, intelligent, loyal and can maintain strong bonds with family members. They are excellent security dogs. They relate well with children and other pets including cats. 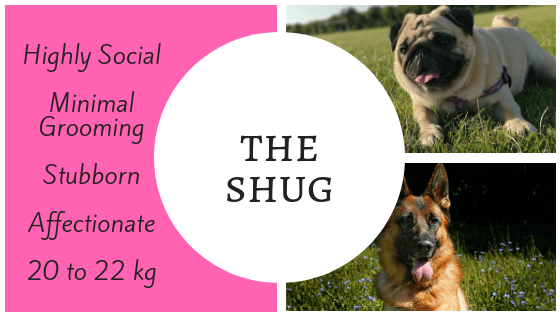 A Shug is a cross breed of a pug and German Shepherd. This dog has a chubby short look with a short snout and a broad chest. It resembles the pug more in appearance; fully adopts the tail and body shape.

The only German Shepherd traces could be in the tail shape, ears and character traits.
Shugs are happy and very playful dogs, a character trait adopted from the pug parent.

They tend also to be over-friendly with strangers so they might not be the best watchdogs. But they are super with kids and also socialise well with other dogs.

Shugs require minimal grooming as they hardly shed. They can be hard to train as most of them adopt the stubborn, strong-willed personality of pugs. Only a firm and patient master can teach them efficiently.

Despite them being a strong healthy breed, they can be affected by a couple of health issues. These include bloating, gastric dilation volvulus, dysplasia and arthritis.

However, with the right high-quality diet and ample exercise these risks can be mitigated. Under the right conditions, a pug can live a whole ten to twelve years.

The colour ranges from black, brown, tan and cream. They weigh 20 to 22 kg on average, and, a full grown dog can between to fifteen inches in height. 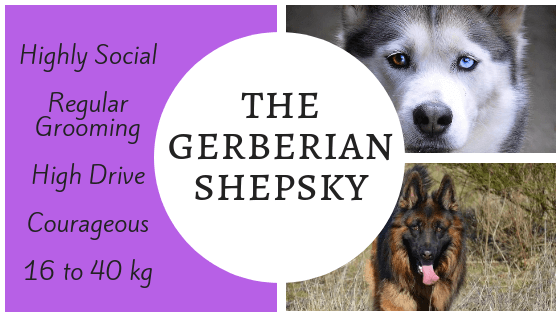 A Siberian Shepherd is a cross breed of a German Shepherd and a Siberian Husky. It is the 12th most popular mix breed in the US. They are affectionately known as Gerberian Shepsky’s

This beautiful medium to large-sized dog is a highly social breed, who thrives on human bonds. This makes them perfect companion and family dogs.

This dog has dignified facial expressions and erect ears. They are also athletic and well built. The breed also has a thick double coat.

Siberian Shepherds require regular grooming; (at least twice a week), they tend to shed a lot, and their fur can be medium to long in length.

Most owners of the breed claim their dogs are highly mischievous, very alert, courageous, friendly and very loyal. They also happen to be extremely smart.

However, their stubbornness makes them hard to train. But, once you manage to crack through the hard-headedness, they are capable of obeying the most complex commands.

This breed comes in several sizes; they can weigh as little as 16 kgs or as much as 40 kgs. They can be 20 inches in height or as tall as 26 inches. When well taken care of a Siberian Shepherd can live through a good 15 years. 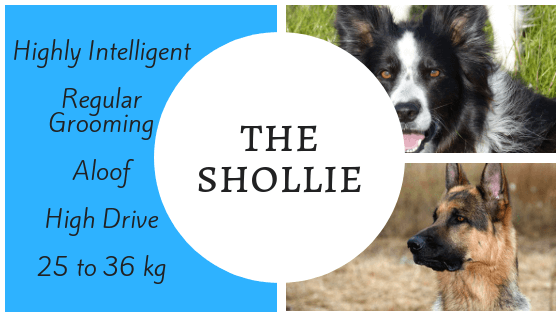 The Shollie is a hybridization between the German Shepherd and the Border Collie. Both of these breeds are in the top 3 of the most intelligent dogs. So it goes without saying that the Shollie is highly intelligent.

The are fun-loving and playful with high levels of energy. The Shollie is definitely no couch potato and needs physical and mental stimulation or they tend to become depressed.

They thrive on strong bonds with their humans. But both the Shepherd and the Collie are aloof with strangers, and the Shollie is no different. They tend to be wary of new comers and other dogs.

The Shollie tends to display equal traits from both parents. And they are one of the mixes that look purebred regardless of their mixed breed.

They have high grooming needs since they either have the double GSD coat or the long coat of the Collie. Both of these types need regular grooming to look their best.

The Shollie is one of the easiest dogs to train. They have the desire to please and the loyalty to boot. The Shollie has a high drive and excels at just about anything. And they make excellent guard dogs too.

If they are kept health on a high-quality diet with daily exercise and stimulation, the Shollie can live up to 15 years.

Depending on which parent they pluck their size from, Shollies can weigh anywhere between 25 to 36 kg.

There is controversy when it comes to the topic of cross-breeding dogs. Some people argue that the increasing popularity of mixed breeds may affect the existence of pedigree dogs.

Some also say that there are health benefits from crossbreeding as many pedigree dogs are beset with health issues. Although that doesn’t mean a mixed breed can’t or won’t have health issues.

Wherever your opinion lies, the critical aspect is to ensure we protect and take care of dogs giving them comfortable homes with the best living conditions we can afford.

Our best friends deserve nothing but the best!

Michael is a passionate writer and avid dog-lover, being a proud dad to two beagles and a golden retriever. He treasures playtime with his furry best friends. Michael specializes in dog health, and has worked as a volunteer at an animal shelter for two years before becoming a regular content creator for PawLabs.