This post may contain affiliate links. I receive a small amount of compensation (at no cost to you) when you purchase from my links, which I’ll totally blow on stuff for my dogs, y’all! You can read my full disclosure here. 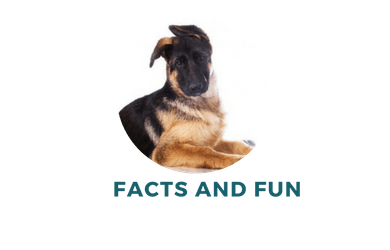 There's so much to be said about the German Shepherd Dog and this post is crammed with fun and interesting facts.

The infographic with fun facts about German Shepherds will give you a glimpse into the history and design of this fascinating breed.  It will also shed some light on what you can expect your German Shepherd puppy to grow into.

The video clip, The Ultimate Tribute compilation which was lovingly put together by David Graham will just blow you away when you see just what the German Shepherd is capable of and the Q & A might just answer a few questions for you!

The German Shepherd breed is relatively young in comparison to other, more ancient breeds like the Border Collie.  But the ‘youth' of this breed has not held it back from becoming one of the most sought after and popular breed of dog today.

Hopefully this will create awareness for the breed especially for new owners or anyone considering a German Shepherd as a pet companion or sports dog.

Q: What is the training that was developed in Germany specifically for the German Shepherd Dog?

A: Schutzhund.  Schutzhund literally means protection dog.  It was used as a test to reveal the true working nature of the dog.  The difficulty level of the test is intended to weed out dogs that are not physically or temperamentally sound for working.  Still today in Europe, breeding stock must pass a minimum of Schutzhund level 1, before passing on their genes.

A: After WWII and with the establishment of the Deutsche Demokratische Republik the East German DDR working line German Shepherd was maintained through strict government-controlled breeding.  The line experienced 40 years of closed breeding.

The breeding of the Czech working line German Shepherd was also strictly controlled from one kennel.  This kennel was established in 1955 and controlled by the Czechoslovakian Army Border Patrol.

A: Yes, German Shepherds are the kings of shedding!  They have a double coat which keeps them weatherproof.  A very important trait when herding sheep in Europe!  They shed their topcoat all year round and ‘blow' their undercoats twice a year –  once in Autumn and again in Spring.

A: After WWI it was believed that ‘German' could hurt the breed's popularity and so the UK Kennel Club officially changed the name to Alsatian Wolf Dog.  And in 1917 the AKC dropped the word ‘German' from the breed's name.  The name, Alsatian Wolf Dog remained for 50 years until 1977 when the breed was again registered as German Shepherd.

Q: Why is the word ‘Dog' part of the breed's name?

A: The word ‘dog' in GSD is actually part of its registered breed name.  The reason is that it was the only way to distinguish between the shepherd (person) and the shepherd (dog).

Q: Which German Shepherd has a star on the Hollywood Walk of Fame?

A: Everyone knows Rin-Tin-Tin, but it's Strongheart who acted in 6 movies that has his own star on the Hollywood Walk of Fame.

Q: The GSD has been instrumental in service during wartime.  Which GSD was honored by the Westminster Kennel Club?

A: Filax of Lewanno was honored for safely bringing 54 soldiers home during WWI.

Q: According to the WUSV how many coat types are there?

A: Sheepherding was dying out in Europe and Max von Stephanitz began to breed the dogs for their other abilities.  It was during WWI when the versatility, loyalty, agility, and steadfastness of the German Shepherd Dog became widely known.

Q: What was the name of the first German Shepherd Club?

This site uses Akismet to reduce spam. Learn how your comment data is processed.