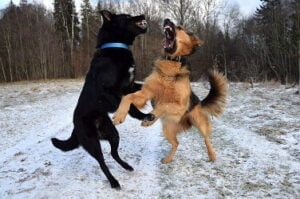 Know how to stop a dog fight quickly and safely.

If you’re here to learn the best way to break up dog fight, I’ll tell you in a second.

But first, I want to share a story with you…

A couple of years back I was walking my two German Shepherds.

And suddenly out of the blue, a fully grown male Rottweiler came charging out of it’s yard.

My first instinct was to make one hell of a big noise to distract the Rottweiler and stop it dead in it’s tracks.

I have a loud voice and believe me, I used it.  But it didn’t stop the dog. I was panicing and my dogs were out for blood.

Thankfully a lady came driving down the road in her pickup  and saw what was happening.

She slowed down and started revving her vehicle’s engine.  This is what snapped the Rottweiler out of its mission to get into a brawl with my dogs.  He turned and headed back to his yard.

If it wasn’t for that lady and her pickup, the situation would have turned out differently for sure.

Dogs are social animals and function well in groups.  But there’s always the possibility of a fight eruping, even between dogs that live together.

We’re all dog lovers here.  And if we see dogs fighting our natural instinct is to separate them before they get hurt.

But, it’s a risky business.

Our first response is to yell at the top of our lungs, just like I did.  But that rarely works as a way to break up a dog fight or even to stop one from happening.

So our next instinct is to physically separate the dogs.  We think that our dog won’t bite us.  And under normal circumstances this is true.  But in the middle of a dog fight, your dog can’t make that distinction.

But it’s not reasonable to expect us to stand on the side lines watching our dogs in a fight.

So What’s the Best Way to break up dog fight?

The first thing to realize is that not all dog fights are actually fights.

Spit and Drool or Serious Fight?

According to Dr. Yin, most dog fights are spit and drool matches, even if there’s a lot of noise going on.  In these ‘matches’ any biting is usually a quick bite and release (if there’s any biting at all).

Whether it’s a spit and drool fight or a more serious one, we have two main goals…

And the golden rule here is to NOT grab anywhere around the head or neck area.  Doing this is a sure fire way to get bitten.

Or worse…  The dog might turn their aggression on to you, in the heat of the moment.

So Dr. Yin recommends grabbing the dog by the rear legs and pull them apart as your first line of defence.

Another way to break up a dog fight is to place your foot on their rib cage and push the dog away.  This does NOT mean you should kick the dog.

Your foot is only for leverage to cause the dog to lose balance and snap them out of the focus on the other dog.

This method is much safer than bending over the dogs and using your hands.  It’s also the best way if you’re alone without anyone to help you.

Best Way to Break up Dog Fight with Distractions

It’s always good to keep in mind that where there’s a dog fight, there are always risks involved.  Both for you and the dogs.

So it’s up to you to weigh up the situation and decide what’s best.

What to do After the Fight is Over

Dr. Yin recommends paying close attention to what happens next…

Does your dog want to have a go at the fight again?

Do they calm down?

Or do they want to get away?

If your dog is the one who wants to continue the spat, you might need some help from a professional on behavior modification.

But whatever your dog’s reaction might be, don’t ignore what happened.  It’s not a fluke.  And don’t be lulled into thinking it won’t happen again.

Recognize the Signs of a Looming Dog Fight 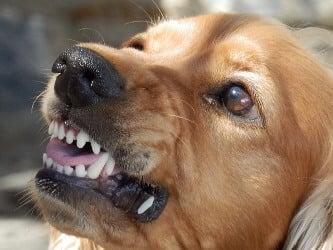 Know the signs of dog-on-dog aggression

It’s popular belief that dog fights ‘just happen’.  But that couldn’t be further from the truth.

Dogs are great communicators, and always give loud and clear signals that they are tense or uncomfortable.

These signs are the precursors to fights, and knowing these signals can put you on the front foot to avoid fights before they start.

These signs apply to dog who live in the same household too, and not only unrelated dogs.

Is your dog jumping up on you or guests? Learn how to stop your dog from jumping up.

Need to top up your dog’s toy box? Check out my recommendations for the best chew toys.

Managing training sessions shouldn’t be difficult.  Here are 5 simple steps you can use to manage sessions like a pro.